SF Pride 2017 – A Celebration of Diversity 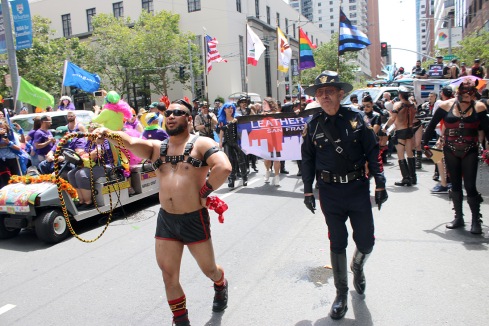 RESIST regression, stand up against exclusion, demand equality, celebrate diversity.   Those themes and more marked this year’s Pride Parade in San Francisco.  Many organizations and businesses were there to support their LGBT members and employees, but the queer organizations were there to say, Resist! and No, we won’t go back!  I loved Race Bannon’s poster, “My safeword is IMPEACH”.  Another of the Leather Contingent’s banners was, “Whip Fascism, We Won’t Go Backwards”.

The crowds were very upbeat and there were plenty who took the opportunity to proclaim their queerness, especially through their attire and clever t-shirts.  Who can forget “Queer as Fuck” or “Can’t Even Think Straight”.

As always it was a pleasure and an honor to march with Leather Pride SF and this year my good friend Brue was one of the Leather Marshals. Congratulations again to Brue and thank you for all that you do for the community.  I also have to give a special mention to Danny for leading us, whip first!  The cracking of his whip got everyone’s attention and was hot to watch!  For photos of all the fun, follow this link.

This was the 32nd annual Folsom Street Fair and it was attended by an enthusiastic crowd of leathermen, drag queens, doms and subs, voyeurs, tourists and more.  I really wonder what brings the tourists.  Are they looking for information, or do they get off on being suburban suzie surrounded by all the kink?  As an example, there was a very hot muscled man, in just his tight fitting boxer briefs and boots with a couple of women and another guy.  His friends were all dressed in street cloths, so that made me wonder why they were at Folsom St.  I should have just gone up to him and asked.

Whatever brought the large crowd of around 400,000, it was lots of fun and the weather was perfect.  It was warm enough that if you wanted to be naked, it was very comfortable.  Here are some highlights from the day.

If its Folsom Weekend, then Mr S Leather is having an in-store party with lots of boys, beer and gear.  As the guys shop and enjoy themselves, lots of them just drop their pants and have a good time.  Here are the photos. 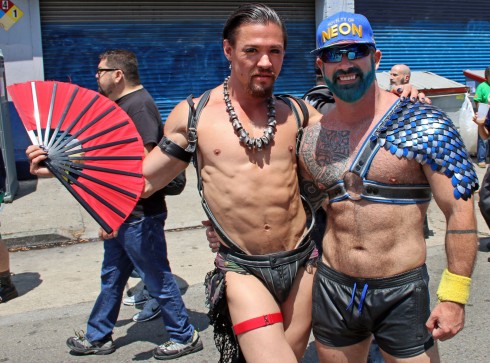 Talk about a hot day!  It was very warm in SF on Sunday for Dore Alley and when it’s warm, that means the men wear very little. There was lots of skin and leather to look at and here are some examples for you to look at.

It was madness and mayhem at Mr S Leather, as tons of guys showed up to shop for something to wear the next day at the Dore Alley Street Fair.  Here are the photos from Some Men Photography.

There has been a lot of discussion about the lack of leather at the Folsom Street Fair, but as I look through my photos there are still plenty of men wearing leather.  Of course the street fair is about celebrating fetishes and kinks, no matter what they may be. It seems that the definition of what is kinky or a fetish has grown to include many more including sports gear, rubber and neoprene, furry costumes, cosplay and so on.  There were a number of drag queens walking the fair and they seemed to garner the most attention at times.  There were several that were amazing!  Kink.com drew large crowds to their performances of BDSM as did Mr S Leather.  The wrestlers were another favorite, as hot, sweaty guys grappled with each other and invited audience participation.  Wrestling singlets have become very popular as fetish wear, so it was often hard to tell who was into wrestling and who just liked the look.

The stage by the SF Eagle was dotted with flaggers or flow artists and was spectacular.  The movement and color was a great addition to the music and was fun to watch.  Below are a couple of photos by Some Men Photography that show some of the diversity of the fair.  To see more photos, here is a link to Some Men Photography gallery.

Mr S Leather extended their usual pre-folsom store party to include Friday and Saturday before Folsom.  There were lots of men from around the world in town for Folsom and many stopped in at Mr S to find a new outfit or accessory for the Sunday street fair. Its always fun to see the guys at the street fair and see what they decided to wear and what new gear the picked up at Mr S. The store party is a preview of what you will see on Sunday, but without the tourists. Just lots of hot men getting trying on leather and gear to see what looks good on them.  Follow the link here to see more photos from the store party.