“For Racial and Economic Justice”  – The crowds were noticeably smaller than last year which actually made for a much more enjoyable experience.  Last year, Marriage Equality became the law of the land, and everyone came out to celebrate.  This year, the parade goers and marchers were just as enthusiastic, but after the tragedy in Orlando, some decided to stay away.  I decided to march this year as an act of defiance.  The slogan “Silence Equals Death” has new meaning now in the wake of so much gun violence.

Marching with the Leather Contingent was fantastic.  We were near the front of the parade and there was lots of interaction between us and the crowds. Many folks wanted a picture with us or wanted a slap on the ass with a flogger.  Check out the photos!

The Jockstrap party was a great success. More than half the guys who came decided to strip down to their jocks while they shopped or hung out with friends. Hot go-go boys entertained and showed their ass-ets. Check out the photos by Some Men Photography. 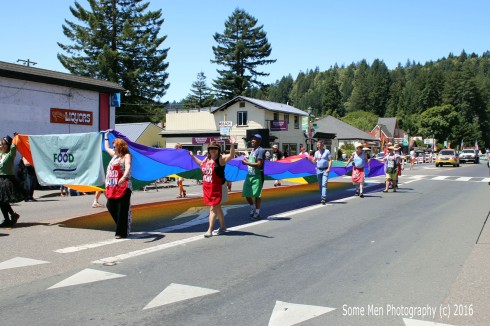 More contingents, more vendors, more fun sums up this year’s Sonoma County Pride 2016.  “United in Pride” was the theme as a diverse group from throughout Sonoma County came together to celebrate Pride.  The Pride Committee did a great job of putting on a fun and successful Pride Parade and Celebration. This was their top priority, but they also promoted working with other community groups and our local governments to address LGBT issues.

It was a great kick-off for the month of Pride.  To see all the photos, follow the link here.