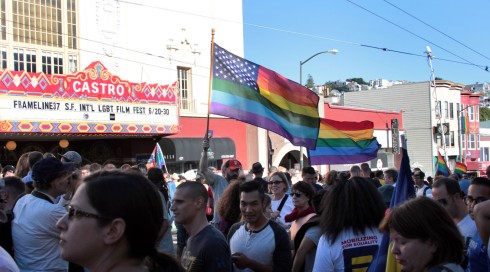 The LGBT community and their allies celebrate Marriage Equality.

On June 26th, 2013, the Supreme Court of the United States ruled that the Defense of Marriage Act (DOMA) was unconstitutional and that any couple legally married could not be denied the benefits of marriage.  On this day, they also ruled that the plaintiffs to Proposition 8 had no legal standing to challenge the ruling by Judge Vaughan Walker.  Thus, Prop 8 was finally declared unconstitutional.  Gays and Lesbians could once again get married in California.  California became lucky 13 in 2013.  In the evening of the 26th, Castro street was closed and people gathered to celebrate the rulings by partying in the street.

This entry was posted on Wednesday, June 26th, 2013 at 11:28 PM and posted in Castro Street, Gay Pride, Gay Rights, Marriage Equality, San Francisco, Some Men Photography. You can follow any responses to this entry through the RSS 2.0 feed.
« Some Men Photography & Andrew Christian
Mr S Locker Room Anniversary Party »